Now that we et to our main goal of this tutorial, that is creating API's that plays around with the real data. If you are seeing this article for the first time, I recommend you to look at my previous parts of the series as well.

In this part of the tutorial, I am going to be explaining you about how to configure the API's in Node JS and test them in Postman. So, lets get started.

In the last part, we were able to start the Nodejs server and also we have connected successfully with MongoDB database. As I already discussed about the problem statement, we are going to be dealing with a Programmer information which has some properties like this.

The very first step would be creating a Model file. If you stuck at this point and scratching your head asking what the heck is Model. Don't worry I got you covered. There are some design principles or design patterns that we generally follow for creating our applications. One of which is called as MVC (Model View Controller) pattern.

When using an MVC pattern, you can lay out the solution to any problem you expect to solve with the software you intend to build. The three components included by name in the pattern are:

Note that the model, which is the core component on which you will wind up focusing, is independent of any user interface you are planning to create eventually. 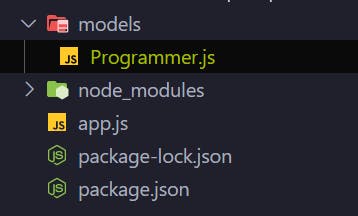 Now, remember that, whatever the model that we create, would be replicated as a schema in mongodb database. So, we need to specify that here. So, our model - Programmer.js file will look like:

In the above code, most of the things are self explanatory. const ProgrammerSchema = new mongoose.Schema() is used to create a schema with the specified values in MongoDB database.

Next, let us write a simple /test API endpoint to just check everything is working. So go ahead and add this piece of code in our app.js file:

app has all the methods of express() as you already know. So, here we are making a simple get call when we hit the /test path. And we pass a callback having two kinds of parameters - req and res, req object is used to receive any value and res object is used to send any request. We are sending a string Hello World for testing purposes.

So, if the nodejs server is running in port 9000, we can hit the API endpoint in Postman. And if we do that, we can say its working properly as shown below:

As you can see it is returning 'Hello World'.

So all things set up, we will go ahead and create Save a Programmer, Get All Programmers API's which are:

Before getting into it, just make sure you have imported the Programmer.js file in app.js file:

And we also may need to use a Middleware, which something that express() provides that will run just after the application gets the request from user and before it sends to the database or server.

Write the below piece of code in app.js file:

What we are basically saying by this is, whatever request that user gives, we are asking it to convert into a JSON object before processing it.

Here in this step, we have used async/await calls for handling methods. And also used try-catch blocks to handle possible errors.

Now, we will test this in postman. The request object for the POST endpoint http://localhost:9000/programmer in our case is :

If we click Send, we can see the response object that has saved, which has unique ID: 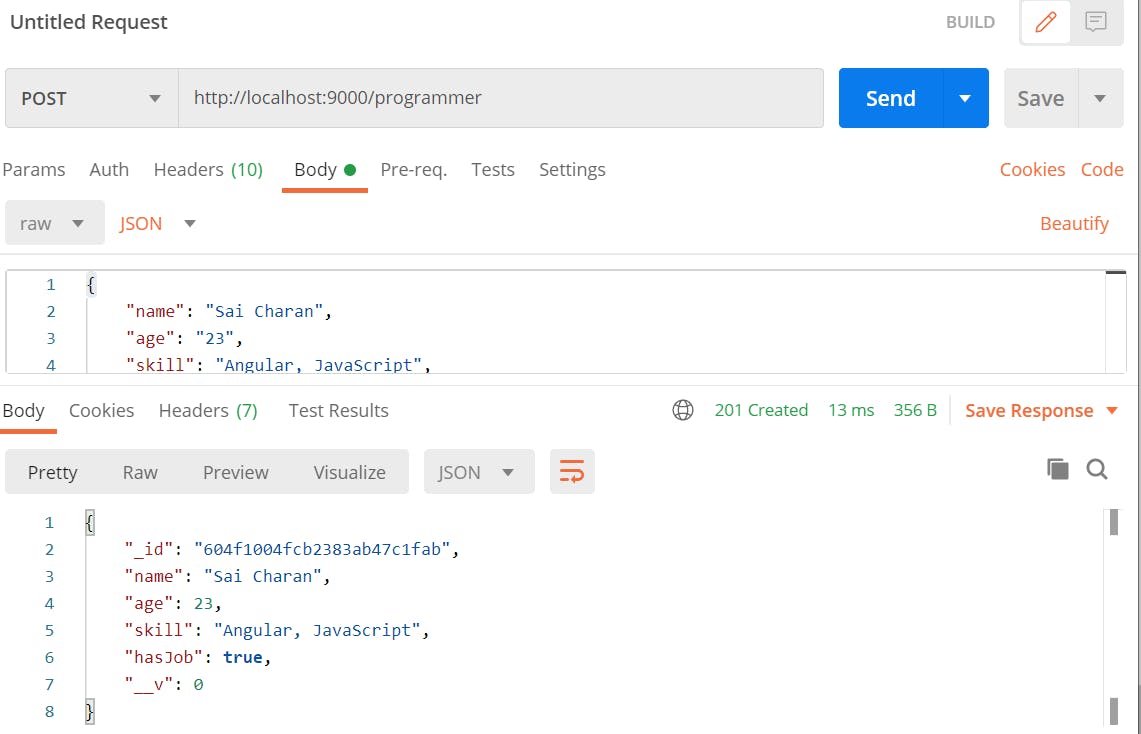 2. Fetch all the programmer details

To do that we need to follow three simple steps:

Now we have done it, lets try to hit the http://localhost:9000/programmers API endpoint in postman: 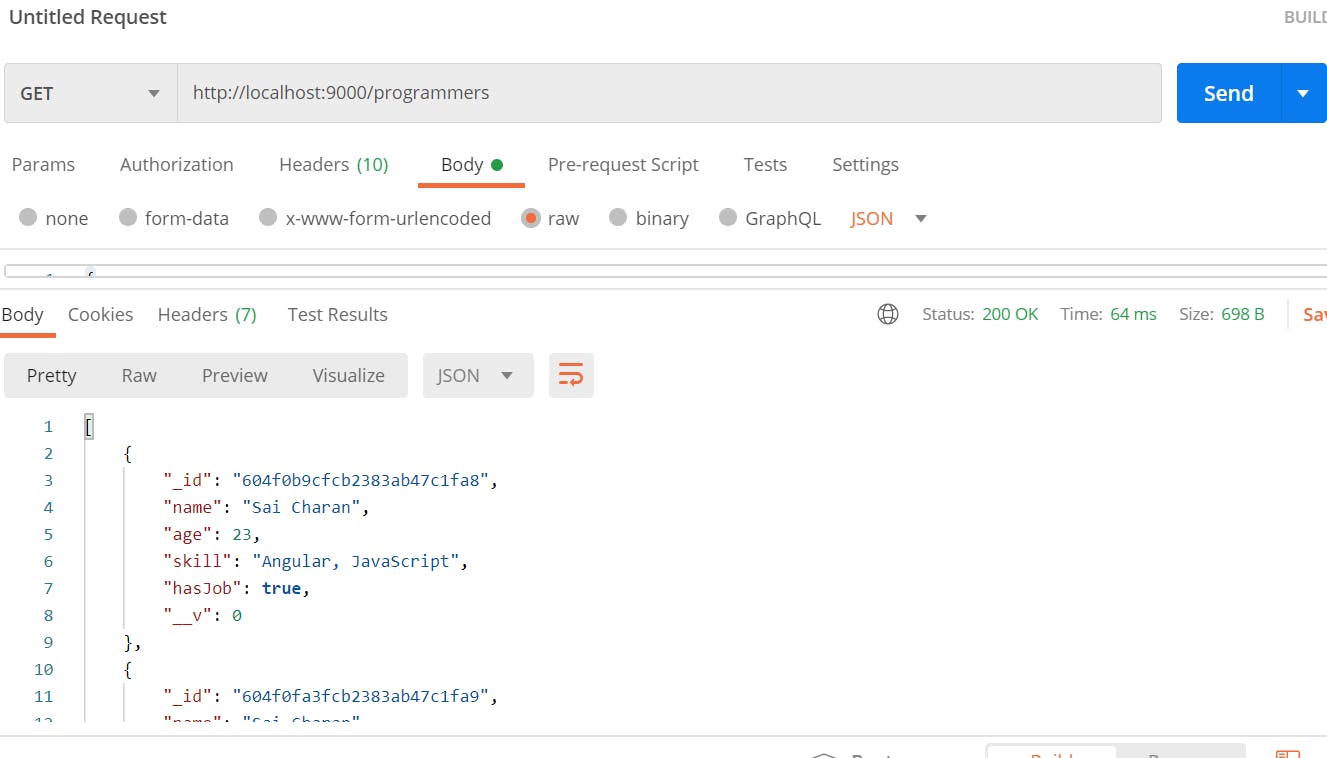 So, we have successfully created CREATE and RETRIEVE parts of CRUD operations. We will look into other API's like Get a particular Programmer by ID, Update a Programmer with new details and Delete a programmer in the next part of the series.

The source code for the code until this part will be available here in GitHub : https://github.com/charandev/NodeJS-tutorial/tree/Part-3

So, I am wrapping up this article now, hope you learned something today.