WHAT WE ARE GOING TO LEARN ? 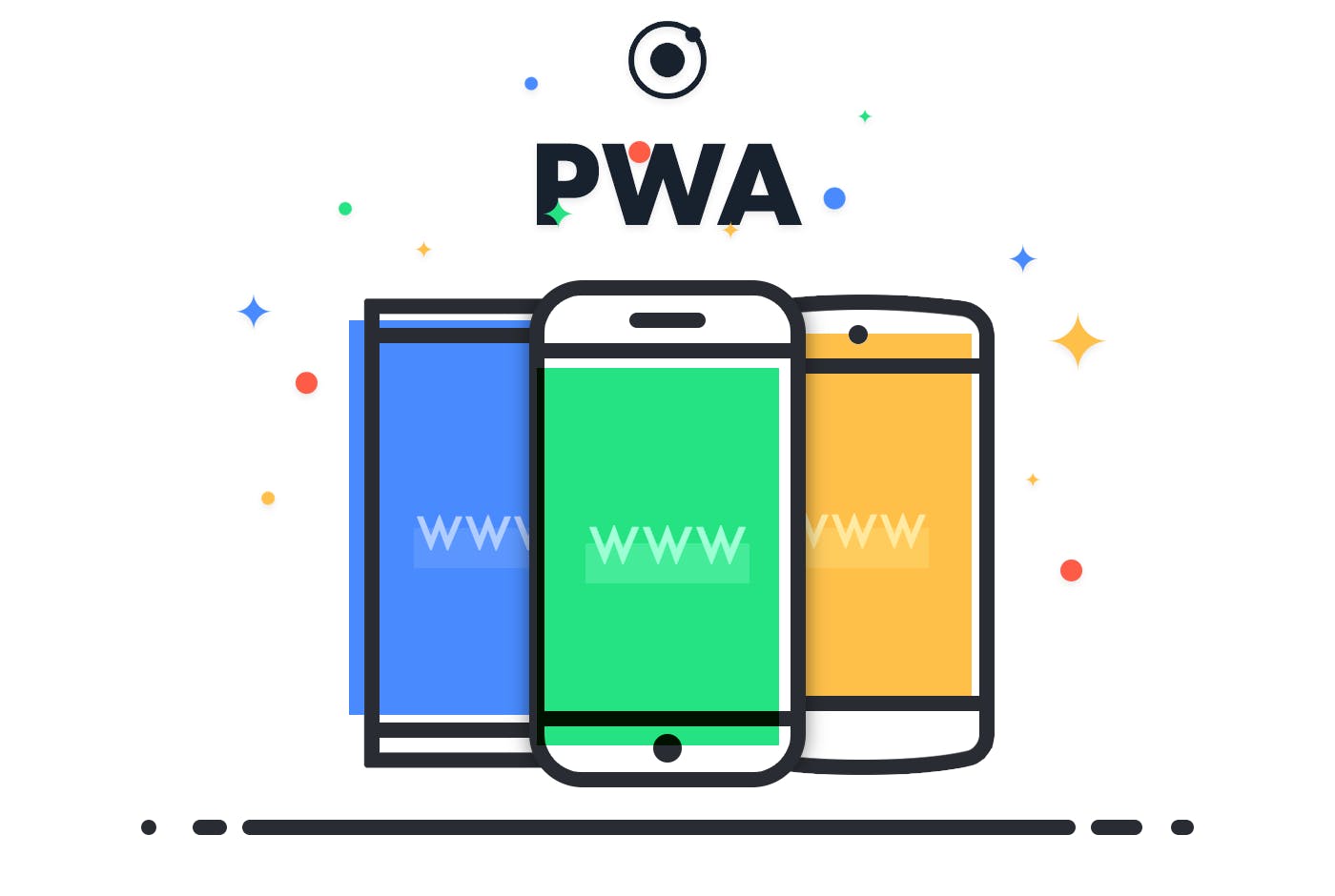 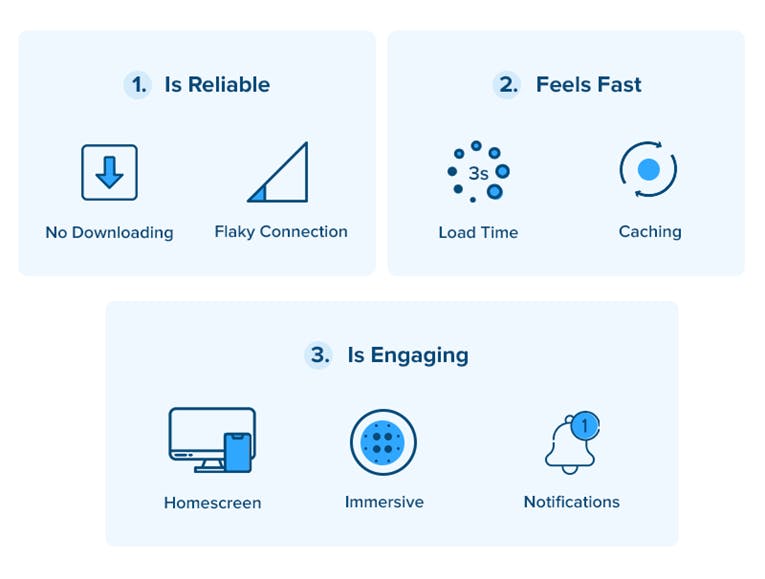 We will dive deep into this in the later part of the tutorial. 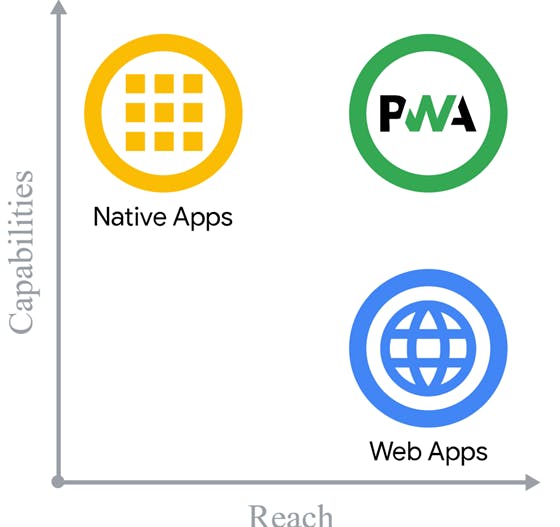 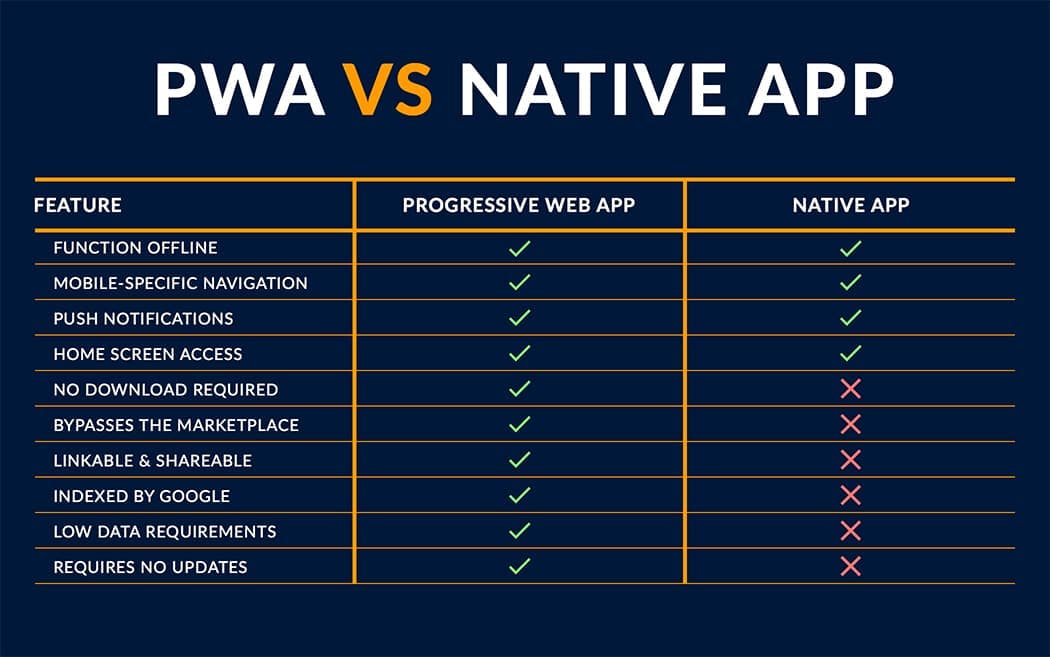 You can see the comparison between Progressive Web Apps and a Native Applications.

3. Advantages and Benefits of using a PWA

We can also say, Why should you build a Progressive Web App?

There are several reasons why we have to go with Progressive Web Apps.

We will discuss some of them now:

A. Quick Response to Users

PWAs are highly responsive and compatible with every device since they adjust the layout according to the device. PWA offers smooth scrolling and also provides fast response when a user interacts with it.

B. Reliable Despite Network flaws

According to studies, more than 65% of the world makes use of a 2G internet connection. So, even when the network is slow, we can rely on Progressive Web Apps, as it can function offline. A PWA immediately loads data from cache and runs seamlessly on both 2G and 3G network conditions.

PWAs are safer than normal web apps, since they are always served via HTTPS instead of HTTP.

Installing a native mobile app requires more data, more time. But PWA is 90% lower in size which makes it extremely easy to install and use all the services. Also PWA consumes less mobile data, mobile battery.

Since no app store act as a mediator, users can take advantage of the updated version as soon as you update it from developer end. There is no requirement of any app store, user can have updated features with a simple refresh of the application.

PWAs are extremely lightweight. To give an example, when compared to the native mobile app, the Twitter Lite PWA is only 600KB whereas the native Android app requires about 25MB for download and the native iOS app is about 215MB in size.

It is hard to find a difference between a PWA and a native app. A PWA exactly looks and feels like a native app and even provides similar features such as push notification, physical installation, display icon on the home screen, etc. It enables users to engage much like a native app.

4. Technical components of a PWA

These components are a prerequisite to develop a successful PWA:

Lets try to understand about each of them, 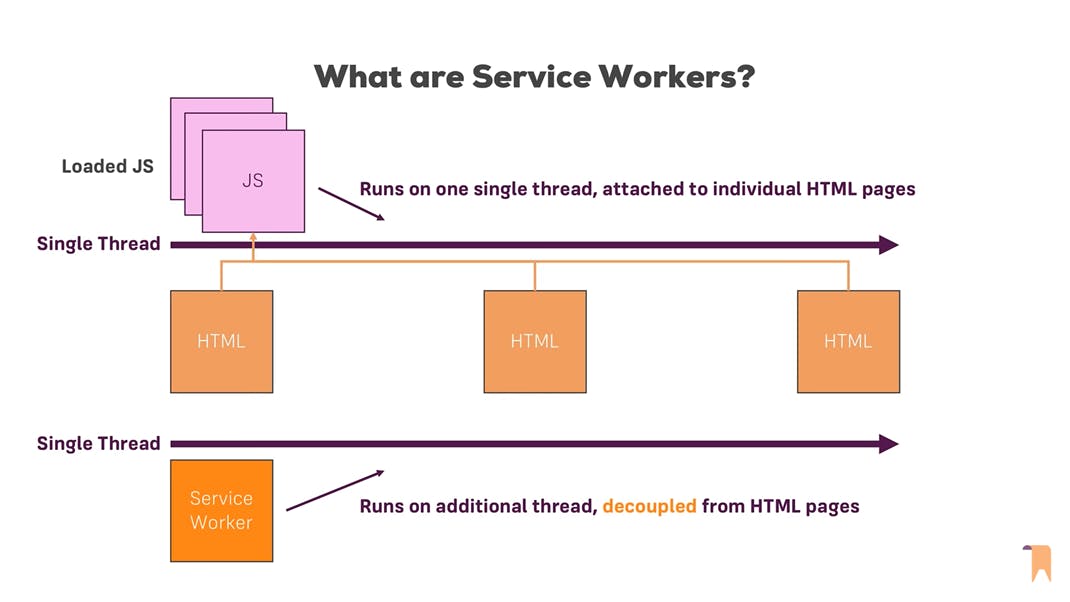 This is how Javascript typically behaves, it runs in a single thread, that means our entire web application which consists of multiple pages or if we are using angular, it is a single page, runs on a single thread.

Javascript and browser allows us to run another thread, which is called as a service worker. This is one of the main thread, but a different thread than our JavaScript code. As you can see in the picture. This service worker thread is decoupled with your application, but still can do different operations like caching the files, sending push notifications, and interacting with the API calls from an application. For example, our application has an GET API call, this service worker can save that data and cache it locally. Therefore, that it can allow our app to work offline as well.

The purpose of the app manifest file is to define the resources that our app needs. It includes the icons, your app’s displayed name, background color, theme, and other necessary details that transform the website into an app-like format.

Service Workers can intercept network requests and modify responses. They know all actions on the customer side, so Progressive Web App must be served over a secure network. Most of the features related to a PWA such as geolocation and even service workers are available only once the app has been loaded using HTTPS.

5. How to convert basic Angular app to a PWA

We will discuss more about how to convert basic Angular app to a PWA with code examples in the next part of this tutorial. Once that post is up, I will put up a link to it below. So make sure to check my blog regularly ;)

Hopefully, you have learned some basics about Progressive Web Apps.